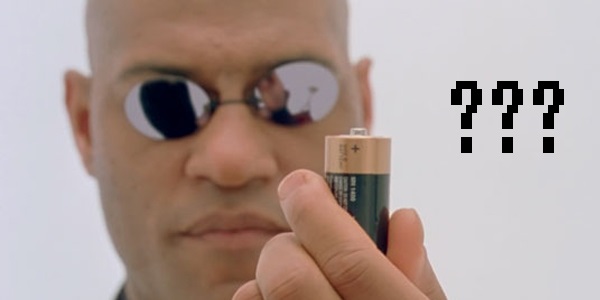 I know what you are thinking, how can the cyberpunk cult movie series from the early 2Ks have anything to do with blockchain technologies? But you forget that the film story is actually set in a post-AI-apocalyptic era with the people trapped in a simulation that is set in year 2000. Of course, you as a viewer back then were not sophisticated enough to understand what you were seeing on the movie screens since you lacked the sweet benefit of hindsight that we have now!!! Hope that makes some sense.

Moving On… Now I have the Herculean task of convincing you that indeed Matrix is an ultra-futuristic blockchain-like network, going directly opposite to some of the key expositions in the movie (and, apparently, the original film canon). First thing point to note is that the Resistance and the people of Zion believe that the Matrix is what enables the machine to “control” the humans and use them as living batteries. What if this basic idea itself is a LIE embedded deep within the belief system of the Resistance to misguide their very understanding of the machines and their motivations?

Well, the evidence that support this theory are everywhere once one starts thinking from this angle. Firstly, machines can easily get free unlimited energy by easily building a long pole with solar cell stuck on the top or by digging down to harness geothermal energy (people of Zion have this tech, so its a no-brainer that machines can also use the same thing).

Then what reason can they have to keep generations of humans engrossed in the Matrix rather than just get rid of them? Even if they have some weird fetish to consumes humans as batteries, why tolerate the shenanigans of the Ones, the Merovingians, the Resistances  and other wierdos out there when they can just sedate all their human batteries with some hallucinogen or opiate or some-such medication?

Another point to note is that the Architect was not even mildly afraid of Neo with all his reality defying super cool power but the machines went into a blind frenzy when the virus Smith starts infecting the Sheeple? If the people trapped in the Matrix were mere batteries, who cares as long as they are hooked up and keep pumping their sweet bioenergy into the machine?

The reality is that, actually, the machines use humans for PROCESSING. The machines found out a  way to use humans’s brain power for their own wicked purposes using a much more advanced version of how our primitive blockchain works: each node computer in a blockchain does the calculations and validations and stores a copy of the state and thus contributes to the blockchain. The computer create the rules of the matrix but it’s the  humans that execute the processing, not unlike the blockchain networks where the network wide rules are decided by the programmers but the network is run by the miners! Therefore a few humans are able to “bend” rules of the matrix same way a rogue miner with extra-processing power may be able to compromise the system temporarily.

It’s a sweet deal for the machine since, for the minor cost of feeding the humans the primordial goo-syrup, the humans themselves maintain their cage and illusion that the matrix is. If a few million humans die or “defect” to Zion, it does no harm to the whole system, they have factories to produce more humans.

But enter Agent turned Virus Smith with his infectious power in the 2nd movie, he prevents the machine from using the humans for processing in a legitimate manner by making unlimited clones of himself. Towards the end of 3rd movie, the Smiths have overrun (what we can assume to be ) a sizable chunk of the Matrix. The virus left unchecked, the machines faced the ultimate threat of being defeated at their own game. The stakes are much higher because Smith ,a  single-minded revenge-obsessed psychopath who cares neither about the machines or the humans, will be in control.

You can now easily see that this is situation is not at all different from the 51% attack that have a real possibility of happening on blockchain networks. Surely you’re now convince that my theory is ether-tight, so I’ll carry on the narrative just to complete the story arc, seen from the new perspective.

Luckily the machines have a fail-safe for exact such eventuality: the good, rebellious people of Zion. Whenever their main processor is corrupted, the machines get rid of them and  enslave the Zion dwellers, leave a small number of them to repopulate and life goes on. So its no coincidence that the machines attack Zion at the same time the people in the matrix are getting overrun by the Smith virus. Then comes our little lord and savior Neo who extends to the machine a slightly more convenient option of cleaning out the Smith-infected Matrix and letting the people of Zion live their miserable lives till a date later in time. But we know Neo is the one who fueled Smith’s obsession and turned him into a virus in the first place. Finally the movie ends with the Matrix becoming restored to a slightly colourful version of its earlier state (Much similar to  how the Ethereum blockchain reverted after the collapse of DAO )

To sum things up, we are definitely giving too much credit to Neo, Morpheus and rest of the gang, who, by trusting the “Oracle” machine program, went into one frantic wild geese chase after another, ended up making a huge mess and that they barely managed to clean up at cost of thousands of lives of people of Zion and potentially risking the lives of all the people trapped inside the Matrix. Hope you liked this fine piece of Blockchain-fiction click-bait and please leave  comments and share it on the social media.